The Origins of the "Y"

The origins of famous "Y" on the mountain above Provo, Utah, are found in friendly, rowdy rivalries between classes at Brigham Young University High School (1876~1968).

During the 1905-1906 school year, high school juniors, the class of 1907, devised a plan to assert their superiority over the other classes. They selected March of 1906 and before dawn one Saturday morning, they shouldered sacks of white lime and began to hike up the side of the mountain. About halfway up, in bold view of everyone in the valley, they began to create their graduating year "1907" in a relatively bare patch.

The Senior class of 1906 and other classes were outraged. It was not the first time that graduation year numerals had appeared, but it WAS the first time a junior class had attempted to eclipse a senior class in the rustic old tradition, triggering violent reprisals.

An Idea is Hatched 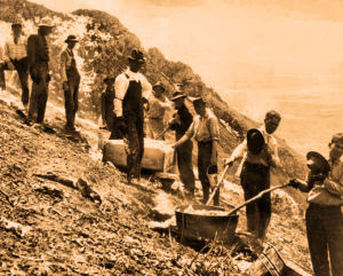 Inspiration from UC-Berkeley
This new threat to the peace of the school and community constituted a serious challenge to school administrators.  They all knew that such rivalries could be healthy, serving to create a valuable bond between students, cementing life-long friendships and giving strength to future alumni loyalty. At the same time, however, emotions had to be kept in check to avoid vandalism and violence.  This called for an exceptionally creative and rapid administrative solution.

Each year, a few BYH faculty members chose to take summer classes at the University of California at Berkeley. One year earlier, in the spring of 1905, UC-Berkeley created a 70-foot "C" in the Berkeley Hills, just in time for the school's annual Charter Day celebration.  These Faculty members returned home talking about the possibility of placing large B-Y-U letters on the mountainside above Provo.

As the Class of 1907 incident developed, High School and University leaders seriously began to consider the idea of painting the school initials on the mountainside in a dignified, monumental manner. They hoped this would unite the classes, and forestall graffiti vandalism by future classes. 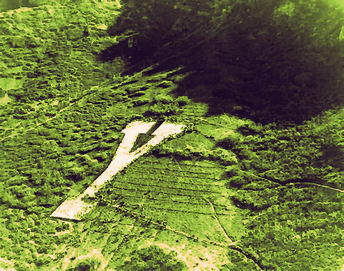 BYU Gets Officially Involved
The school purchased 380 acres on the face of the big mountain east of of the Upper Campus, extending clear to the top of the mountain, for the project.

Preparations for placing the University's initials on the mountainside began in April of 1906 with a survey for the letters B, Y, and U. The letter "Y" was laid out first to insure that the initials would be properly centered on the mountain.

When the outlines were complete, the center letter "Y" measured 322 feet in height and 120 feet in width. From the air, the letters would appear elongated, but they were intentionally designed that way so that they would look normal from the valley floor.

The first "Y" was designed in a simple Arial font but in 1911 the serifs were added to give the Y its distinctive look.

Students are Worn-out After the "Y" 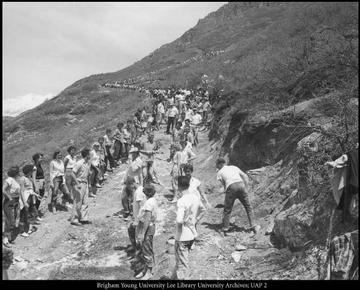 Where are the "B" and the "U"?
Dr. Fletcher, in his autobiography, recounts how the high school and college students participated in that first Y Day:

"The students stood in a zig-zag line about 8' apart stretching from the bottom of the hill to the site of the Y. The first man took the bag of lime, sand or rocks and carried it 8 feet and handed it to the next man. The second carried it another 8 feet and handed it to the third man and thus the bag went up the hill, each man shuttling back and forth along his 8-foot portion of the trail.

All the students started with enthusiasm as they expected to be through by 10 o'clock a.m. but it was a much bigger job than anyone expected. It was 4 p.m. before the Y was covered, and then only by a thin layer. So no attempt was made to cover the other two letters.

It was very hard work and most of the boys had had no breakfast and no dinner. No one dared to quit as it would break up the line. In the afternoon it was more than some of them could take and they fainted and had to be helped down the hill.

I am sure those who worked in that line that day will never forget it. They were somewhat rewarded when they got back to campus and looked at the beautiful white Y on the mountainside in just the right proportions. It looked like it was standing in the air just above the ground."

The Making of the "Y" 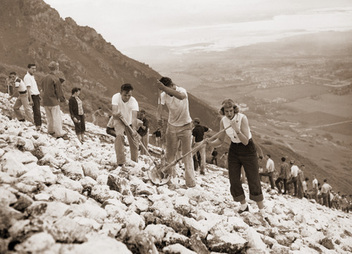 The original Y consisted of only a thin layer of lime powder, and was in constant need of repair. Students showed their loyalty to their class and to the school by climbing the mountain each year to give the Y a fresh coat of lime.

Hoping to make it more permanent, a layer of rock was added in 1907. The next year, 20,000 pounds of sand and cement were carried up the mountain to form a three-foot high wall around the letter to hold it together.

Every spring, students organized themselves into groups and assisted in cleaning up the campus and community of Provo. The event was called "Y Day", and most of the morning was spent in whitewashing the "Y".


Y Day was typically held in the spring and was a way for students and faculty to show their loyalty to Brigham Young University.  The main purpose of the day’s activities was whitewashing the Block Y with a fresh coat of lime.  Everyone participated in the activities.  The faculty cleared the trail, freshmen hauled water from a spring, sophomores lugged the whitewash up the mountain and mixed it in large wooden troughs, and juniors and seniors poured the mixture on the large Y.

By the 1960s both male and female students participated in the whitewashing of the Y.  In 1972 the bucket brigades were replaced by a helicopter and this part of Y Day ended for students.

The whitewashing of the Y by students quickly became an important tradition at the university and a vital part of Y Day. This tradition was discontinued in 1973 due to concerns that the large number of students involved was speeding up the erosion of the mountainside. 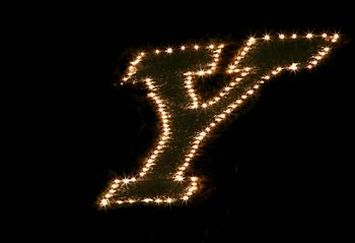 In 1924 the block Y was lit for the first time–a dangerous process involving rags and kerosene that was replaced by small light bulbs in the 1970s. The Y is lit during Homecoming and for other important events at the university. The Y celebrated its 100th birthday in 2006 and continues to be the most recognizable symbol associated with Brigham Young University.

Five times a year Y Mountain flares to life. The Intercollegiate Knights, a club dedicated to chivalrous principles and maintaining school traditions, roll out a cord of lights around the border of the Y for Freshman Orientation, Homecoming, Y Days, and April and August graduations. Streams of students climb up to the Y during those days.

Earlier years saw members of the Intercollegiate Knights bear torches up the mountainside to light buckets of kerosene-soaked mattress batting placed around the edge of the Y.

After several decades it was decided that the kerosene was too dangerous, and a generator is now placed nearby to power 25-watt light bulbs through the night. Members of the club remain on the mountain through the night to watch over the lights and insure that they remain lit through morning. On such nights, the dazzling symbol of BYU can be seen from the far reaches of the valley.