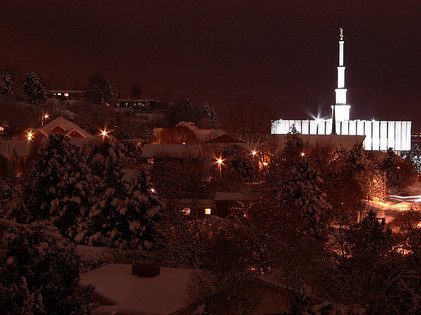 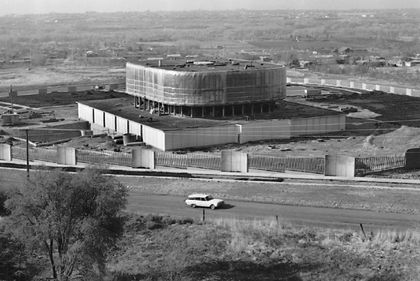 The original design for the Provo Utah Temple included a gold-leafed statue of the angel Moroni atop a gold-colored spire. The statue was eventually eliminated from the design, though one was added over 31 years after its dedication.
​
​Click Here for a description of the interior.

The Cloud and Pillar of Fire 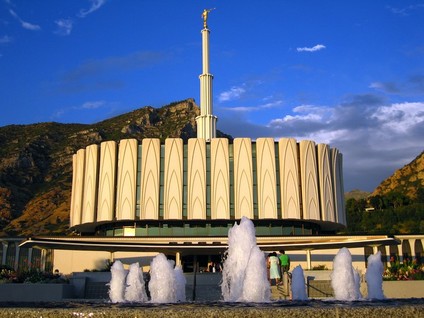 The Provo Temple represents the apex of the Mormon effort to create a modern expression of a connecting point between heaven and earth and between God and Man.

It was only recently that I heard that the architect of the Provo and Ogden temples had intended the form of the buildings to symbolize a cloud and a pillar of fire.

The temples were breaking new ground by representing the House of God in a modern, abstract way. In contrast to more traditional temple architecture (usually grander versions of buildings we are already familiar with), the other-worldly quality of the Provo and Ogden Temples seems to suggest that the realm of God is very different from the world we live in. As they challenge our expectations for architectural space and form, the temples represent a conduit lifting us from this world into a higher one.

Still, the other-worldly form was not enough by itself. The architect applied modern detailing in a way that suggests the religious nature of these unconventional buildings. The spires, pointing upward, are an age-old device for signifying sacred structures. On the Provo Temple, the pointed arches on the drum are a stylized modern version of a traditional Gothic arch which is repeated subtly on the spire. On the Ogden Temple, the architect took a more daring and abstract approach, using the parabola as a unifying motif. While the Gothic arch points unwaveringly toward God, the parabola seems at first glance to point downward. But the sweep of the parabolic curve also suggests inevitable and dynamic upward movement, thus functioning as a modern equivalent of the traditional pointed arch. Looking at the parabolas on the temple, I could envision arms raised toward heaven in supplication or praise. This dynamic parabola motif is repeated on the grills over the windows on the drum, on the spire sections, and on the grills in the entrance doors. Such streamlined modern elements are what make the twin buildings so compelling and exciting. SunstoneMagazine.com