The Fort Utah replica has been demolished for safety reasons. This is what used to be at Fort Utah Park in Provo Utah 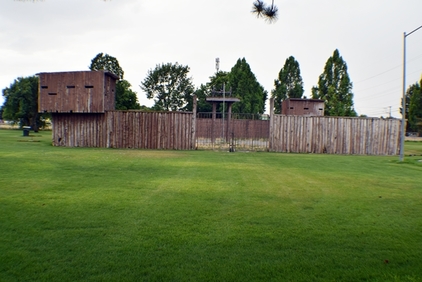 Fort Utah was the name of the first and second forts built in Provo when the settlers arrived in 1849. The first fort was located south of the Provo River about where I-15 crosses the Provo River today.

​The original fort consisted of a number of log houses surrounded by a 14 foot palisade 110 wide and 220 yards long. The fort had gates at the east and west ends, and an elevated deck in the middle for a cannon. After the first year of flooding, the fort was relocated north and east of the original site, to where the present day North Park is located. 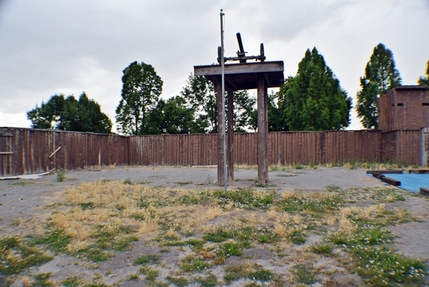 Fort Utah Replica Central Canon Platform, Provo Utah
Just a few days after the Battle Creek Massacre, the Mormon church decided to build Fort Utah. President of the soon to be Provo Branch, John S. Higbee, along with brother Isaac and Dimick B. Hintington, church counselors, led a group of about 150 people (30 families) from Salt Lake City to build the fortress at the present-day city of Provo, Utah.

Established on March 12, 1849, the fort included several log houses, surrounded by a 14 foot palisade, with gates one the east and west sides. The fort was armed with a single cannon mounted on a central platform.

The fort became a trading post for a short time, with the Mormon settlers trading guns and ammunition with the Indians, for furs and pelts. However, this changed when three Mormon men killed an Indian called "Old Bishop." The tension between those living at the fort increased to ultimately result in the Battle of Fort Utah. Courtesy of Legends of America

The original fort was moved to Sowiette Park in April 1850 and was popularly known as Fort Sowiette, named for Indian Chief Sowiette, the principal war chief of the Ute. Sowiette liked the Mormons and when the fort was threatened by another band of Indians, Sowiette joined the Mormons inside the fort and helped with the defense. The attackers withdrew and the settlers were grateful for Sowiette's help.
Abandoned as a fortification in 1858.